What Is Cross Addiction?

When you visit one of the drug and alcohol treatment centers in Tampa to receive treatment for your substance use disorder, it’s likely that you’ll be warned about the potential for cross addiction to substances that are not your “drug of choice.” For example, if you’re in treatment for addiction to opioids but never had a problem with alcohol, you’ll likely be warned about your vulnerability to becoming an alcoholic. Sometimes, you may even be warned about the prospect of substituting behaviors like excessive eating, sex, and exercise as a form of cross addiction.

But what is cross addiction after all? Is it true that people who overcome one addiction are at increased risk of developing another one down the line? And, just how likely are you to substitute another substance when you give up your drug of choice? We’ll answer all of these questions and more in the brief article below. For more information regarding drug addiction treatment in Tampa, please get in touch with a member of our team here at Phoenix House Florida.

Related: How to Stay Sober When Surrounded by Drugs and Alcohol

How Does Cross Addiction Happen?

Cross addiction, also known as addiction transfer or addiction interaction disorder, is a concept that implies a person who has developed a substance use disorder to one substance is at higher risk to develop an addiction to another substance or behavior. It’s important to note that while the new addiction is typically to another controlled substance, it could also be to other compulsive behaviors, such as gaming, gambling, or having sex. Consider someone who is in rehabilitation due to a dependency on prescription painkillers. As this person recovers, they may be tempted to celebrate their recovery with a few alcoholic drinks. Since the original addiction was drug-based, it’s easy to see why they may believe they’re not likely to get addicted to this substance.

Unfortunately, the opposite is usually true, especially for those who are new to recovery. Although alcohol may not have been their drug of choice, it produces the same high which made them originally indulge in the addictive behavior. In order to maintain this feeling, the addicted individual eventually makes their way down the path to a new addiction.

Related: How to Avoid Addictive Behaviors During Times of Uncertainty

How Do You Avoid Cross Addiction?

The best way to avoid cross addiction is by educating yourself and others. If you already have a substance use disorder, you should know that you’re significantly more likely to develop cross addiction. Be aware of the risk and take inventory of what you may be doing to create cross addiction, such as going out for drinks too often or spending too much time playing video games. Always be conscious of the fact that your brain is constantly looking for that feel-good dopamine rush that you got when you were originally using.

It’s also critical to be your own advocate by educating your doctors and letting them know you have a drug or alcohol addiction. Avoid taking addictive medications, if possible, and don’t go home with a large supply. It may help to have a family member or friend in place who can dispense the medication and ensure that you’re taking it exactly as prescribed. In particular, you’ll want to keep a close eye on pain medication like morphine or oxycodone because they can be extremely addictive.

If you or someone you love is in danger of developing cross addiction, don’t hesitate to get in touch with a member of our team at Phoenix House Florida — one of the top drug and alcohol treatment centers in Tampa.

If you or a loved one is struggling with addiction, speak with a specialist regarding drug rehab in Tampa. To schedule a consultation with Phoenix House Florida, please request an appointment today.

Disclaimer: The contents of this website are for general educational purposes only. All content and media on the Phoenix House Florida website does not constitute professional medical advice nor is the information intended to replace the services provided by Phoenix House Florida or other qualified medical professionals. If you believe you are having a medical emergency, call 911 immediately.

At Phoenix House Florida, we have a passion for healing. If you or your loved one are in need of subtance use treatment, we are here to help. Give us a call or submit our appointment request form today.

How Can We Help?

For some patients, stepping away from the buzz of everyday life is the only way to make a full recovery. Inpatient treatments help patients refocus their recovery efforts to achieve positive, long-lasting outcomes.

There’s no one-size-fits-all approach to recovery. Outpatient treatment must follow a continuum of care that starts with a thorough needs assessment and ends with recovery monitoring. 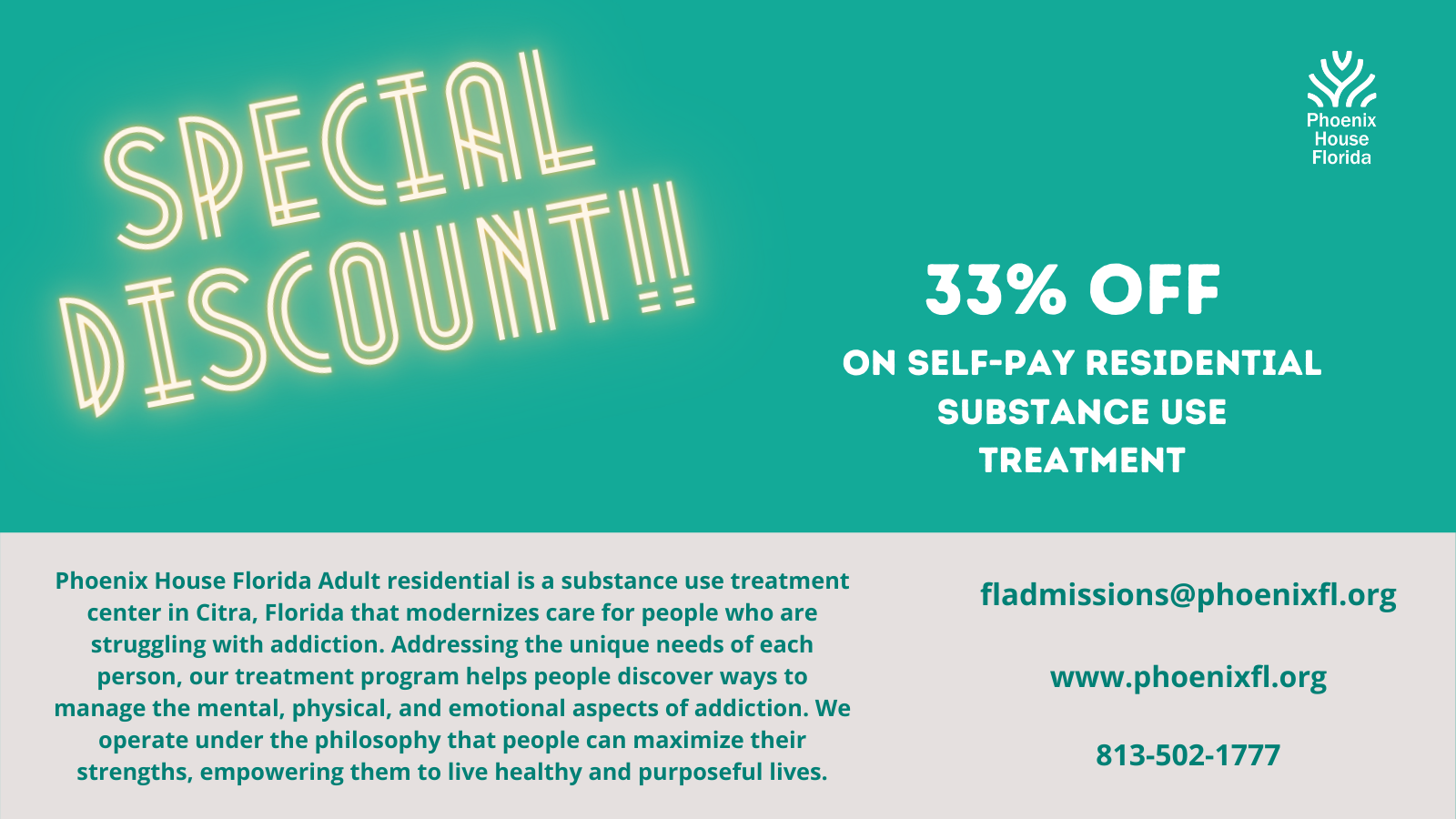